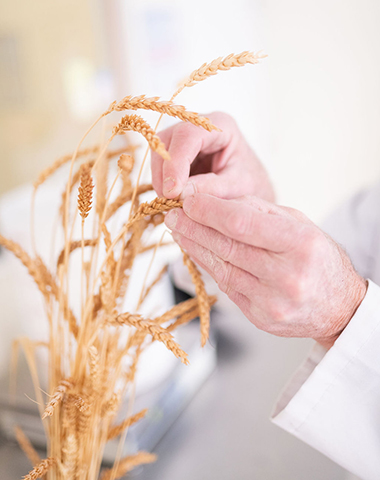 For David Kaisel, milling grain is about more than making fresh, flavorful and nutritious flours.

For the beginning farmer and businessman, it’s about reconnecting growers with local consumers, improving his community through education and advocacy and sparking a return to locally produced and consumed agricultural goods.

David owns and operates Capay Mills in rural Capay, California, about 40 miles northwest of Sacramento. There, in a facility in town, he transforms locally grown heirloom grains into fresh, distinctive flours using an artisanal stone mill.

When he started his business in 2015, his goal was to give growers in his area a place to process their rotationally grown grains. Until the 1950s, California was the third-largest producer of wheat in the country. But as wheat processing consolidated, and the cost of land rose, growing grains as a commodity all but disappeared in the Golden State.

“I knew farmers who were growing heirloom and specialty grains, but no longer had the infrastructure to process them at a small scale,” he said. “That was the gap I was most interested in filling.”

While most commercial commodity mills require a minimum of 17 tons of grain to process, David can serve farmers producing one, two, or five tons in rotation with their row crops. With help from a loan from AgWest Farm Credit (formerly Farm Credit West) he is on a mission to expand his milling capacity from 300 pounds per hour to 1,000 pounds per hour.

David grew up working with food and in restaurants, but until recently had no formal agricultural training. He found support at the Center for Land Based Learning in nearby Woodland, California. There, he participated in the Center’s California Farm Academy and Farm Business Incubator programs, gaining a foundation for modern sustainable farming and building relationships with local growers.

By creating a sustainable local grain and flour economy, David hopes to reconnect producers and consumers in the area and spark conversations on place, culture, sustainability and the environment. Demand for his products has steadily increased, and he currently sells his flours to bakeries and restaurants in Sacramento and the Bay Area, and at farmers’ markets around Northern California.

Looking forward, David is focused on expanding his business into a regional milling facility, and achieving economies of scale, particularly with labor costs. Along with the loan from AgWest Farm Credit, he raised more than $100,000 in two weeks through a crowd-funding effort.

The funding will go toward facility upgrades and an organic milling line with the capacity to produce 2,000 tons per-year, as well as a delivery truck and IT investments for processing orders.

“[Farming] is a lot of work and hard to get it off the ground, but when I see how much enthusiasm and interest there is out there for retailers, chefs and restaurants—when they realize how different this is from what we’ve been eating for the last 150 years—it’s very satisfying,” he said.

More about Capay Mills can be found at www.capaymills.com.