Lifeline for a new farmer 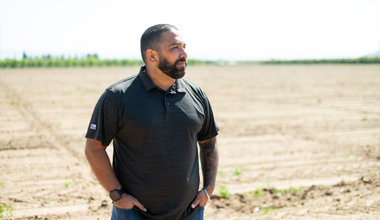 Fernando Mendez had a dream: The early-retired U.S. Army veteran wanted to plant a 15-acre almond orchard on land he owns in Reedley, California, as the backdrop for a garden and wedding venue he hopes to create someday. But as a new farmer, nobody would give him a loan.

Eight banks turned him down, including his depository bank and the U.S. Department of Agriculture. Then one day, while searching online for veteran assistance programs, he learned about AgWest Farm Credit (formerly Farm Credit West) through the Farmer Veteran Coalition, a nonprofit helping military veterans start careers in agriculture. He made a call and, after two years of ‘no’s, he finally heard a ‘yes.’

It was really a lifeline,” said Fernando, 39. “ AgWest Farm Credit helped me get the ball rolling—I didn’t think I was going to start my farm for another two years.”

Fernando is a second-generation Mexican-American and helped his grandparents on their plum and peach farm and packing house as a boy. After five years of service in the Army, including intense battle in Iraq, he became an environmental engineer for the Department of Veterans Affairs. But the conditions of the job triggered his post-traumatic stress disorder and he knew he needed a change.

“I didn’t like being inside,” Fernando said. “You can’t beat being outside, or seeing the mountains.”

But starting an almond orchard from scratch is not a low-cost endeavor. Formerly planted with plums, his land was set up for flood irrigation and filled with root-rotted trees needing removal. Instead of spending $30,000 to grind up the old trees, Fernando bought a grinder and ground several acres himself before burning the remainder.

He also leveled and ripped the land, and installed a new, more efficient drip irrigation system. Now, about 90 hoses run across the field, bringing life-giving water to his 2,000 Shasta almond trees and powered by a deep and full well on the property.

Looking for ways to build capital

A savvy businessman, Fernando is making the most of opportunities available to him. The USDA’s Farm Service Agency covered half the cost of his drip irrigation line because it helped meet requirements of California’s Sustainable Groundwater Management Act (SGMA). Similarly, the San Juaquin Valley Air Pollution Control District paid him $52,000 to part with his older diesel-burning John Deere tractor. He used the funds to buy a newer, more efficient tractor.

He was considering installing solar to help offset water pumping costs and has a secondary business idea of opening up a compost facility to help farmers meet more stringent environmental and air pollution control laws.

Fernando credits AgWest Farm Credit for helping make his dreams a reality and giving him a new life on the farm.