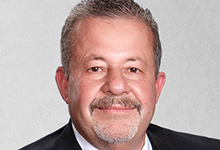 Joey Airoso serves on the AgWest Farm Credit Board of Directors. He previously served on the Farm Credit West Board and was first elected in 2007, serving as Board Chair for three years. He completed the Farm Credit Premiere Governance Series program.

Joey owns and operates Airoso Dairy Farms in Pixley and Tulare, California, where he produces dairy (Registered Holstein and Jersey cows), corn, wheat, alfalfa and pistachios. He is a Board Member of the California Farm Bureau Federation, Tule Land and Water Trust, College of the Sequoias Ag Advisor, Pixley Irrigation GSA, and Land O’Lakes Region 80 Representative. He also serves on the Southern California Gas Community Advisory Committee and the National Dairy Shrine board.

Joey is a fourth generation dairy farmer. His family first settled in the Tulare area in 1912. He farms in a partnership with his parents, wife and son. Joey’s passions include agriculture, registered Holsteins and Jersey cows, and - most of all - his grandchildren and watching them grow.