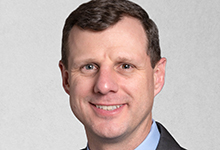 Prior to the merger creating AgWest Farm Credit, Bill served in various roles for Northwest Farm Credit Services since joining the company in 2004. These previous roles include Chief Lending Officer, Montana President and Vice President of Enterprise Risk Management and Credit Underwriting. He also previously served as a Relationship Manager in Montana, working in the Bozeman, Havre and Billings branches.

In his spare time, Bill and his wife enjoy spending time with their two sons and helping out at his family’s ranch in Montana.